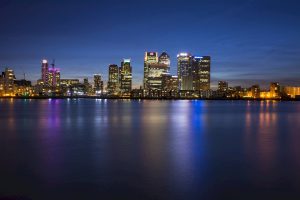 Thrills, skills and biometrics – what the financial sector is thinking about Windows 10

Looking purely at Microsoft’s marketing of Windows 10, you’d be forgiven for thinking that it has been tailor made for the financial services industry.

The impressive turnout of IT decision makers from the financial services sector who recently attended our Fujitsu Windows 10 workshop is testament to the high levels of interest that exist around Microsoft’s latest operating system.

We invited sector clients down to our offices on Baker Street in central London to demonstrate some of the key features of Windows 10, and to discuss early insights into the product and strategies for rolling the OS out across respective enterprises.

As a leading Microsoft partner already involved in some pioneering Windows 10 projects, we are well-placed to offer advice but are also extremely interested in getting feedback from organizations we work with.

Many of the senior IT executives from the financial services sector I have spoken to have been using Windows 10 for a while now – typically getting to know the system as part of a small group of pilot users within their organization.

The initial response has been positive on the whole. But as you’d expect from an industry where data privacy is paramount, people are tentative about some of the new security features, such as the much-vaunted biometrics functionality.  And as with any major Microsoft OS release, the excitement of getting to use new technology is tempered by considerations around the potential upheaval an enterprise-wide upgrade may entail and the costs attached to any roll out.

The good news is that the vast majority of enterprises have already made the jump from Windows XP to Windows 7 – an upgrade that will have been more complicated than any anticipated move from Windows 7 to Windows 10, as there is a high level of compatibility between these two later systems.

Windows 10 is a landmark product in many ways. One prime reason is that it is likely to be Microsoft’s last ever full OS release. In the future, rather than coming out with a major upgrade every three or four years, new features, fixes and improvements will be fed through incrementally as they become available. This approach has been labelled Windows as a Service or Evergreen.

There has been cautious optimism about this change in emphasis from the financial services sector, where the constant cycle of testing and deploying new patches for Windows can be costly and time consuming.

The potential to move to a world where much of this is automated is attractive but this hands-off approach is likely to take some getting used to in a sector where traditionally the IT department has kept a tight rein on its ICT.

Because this is Microsoft’s last big upgrade, IT directors are starting to think long and hard about how they approach it.

While they may not be in any rush to roll out Windows 10 across the enterprise, IT decision makers realize this may be the last opportunity in a while to get funding for a large scale workplace transformation exercise and they are having to consider what functionality they would like to include in any implementation.

Do they, for example, adopt the Windows 10 developer strategy and universal app platform, which enables an app to be developed once but run on every Windows device be it a phone, tablet, laptop or PC? What about support for third party apps – will they work as well on Windows 10? Which valuable legacy systems should they virtualize and how should this be approached?

Predictably for the financial services sector, there was a lot discussion around the security features in Windows 10 – an area that Microsoft has invested most in with this new release.

Historically, much of the IT investment in financial services has been around risk management and compliance. This has involved adding layers of security to counter malware attacks and potential user errors. But with all these add-ons the user experience has tailed off – desktops take ages to boot, the all-round performance of devices is below par.

With Windows 10, files and emails are encrypted as part of the workflow and we believe having this functionality built into the operating system will ensure the user experience is more seamless.

The security feature from Windows 10 that has grabbed most of the headlines has been Windows Hello, which facilitates the use of biometrics – be it facial recognition, or fingerprint and iris scanning –  to give access to devices and services.

Interest in this area is high albeit guarded as the financial sector is with any new security technology.  But companies realize that passwords and other authentication media such as smart cards are increasingly vulnerable, and that biometrics is probably the way to go.

Fujitsu has already worked with a bank in Mexico to install fingerprint scanners on some of its cash machines and can help organizations looking at biometrics with planning their roll-out.

This is what we do. Draw on our broad experience of the financial services sector and work closely with customers to define their workplace roadmap and strategy.

It’s fair to say that Windows 10 is a great platform that offers enterprises the potential to save costs and improve productivity. Treating any roll-out as a simple OS upgrade and leaving many of the services as they are today without considering the full functionality that Windows 10 offers means organizations could be missing an opportunity.

To learn more about Windows 10, see our previous blog post here. Click here for the next blog post in the series that looks at Windows 10 in the retail sector.

Tags - biometrics • financial services • OS upgrade • Security • Windows 10
Share this article
Next article Get in shape for your Windows 10 migration: 7 things CIOs need to know
Previous articleWill Windows 10 push us towards an Internet of Things nirvana?