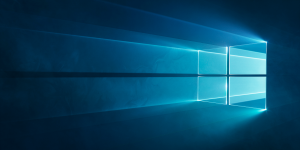 The hyper-connected world that we now inhabit continues to alter the way we live, work and play.  The perception of what a workplace (and workforce) really is and, most importantly, could be in the future is consistently being broken down and re-imagined. So when Microsoft launched its latest OS last year, it got us thinking.  Could Windows 10 be the catalyst that fuels the next evolutionary leap?

As the human-centric model becomes a reality, the age of an anytime, anyplace, anywhere workplace is being ushered in. A workplace with individuals (with unique demands, work styles and productivity needs) sits at its core.

This will become all the more apparent over the next five years, as we see an increase of multiple generations in the workplace at the same time. Organisations will have to meet both business demand and end user expectations to remain competitive and attract new talent. As new (and increasingly mobile-first) generations continue to join the working world, they expect to be able to easily access services across a range of devices, both corporate and personal. Of course, these won’t just be the devices we know and use today.

In fact, as we approach 2020, consider the impact emerging technologies will have within the same workplaces – from wearables and the Internet of Things, to augmented and virtual reality. While this may feel like tech innovation for the next James Cameron blockbuster, in reality it will create a world where workers have the ability to be virtually ‘present’ in an office environment without ever leaving their home, with full access to documents, data and, often most importantly – colleagues.

With Windows 10, Microsoft has refocused and primed the new OS to embrace this future; shifting their approach from traditional software company to a service provider model. This is all whilst placing the individual at the heart of the experience like never before.

For the first time, apps developed for a Windows OS will be device agnostic from desktop to smartphone, meaning truly seamless mobile working. After 20 years, the manner in which updates are rolled out is changing, baking in an increased agility that will allow Windows 10 to keep pace with the latest cyber threats and device trends in a way which was simply not possible with previous releases.

However, without a back-end infrastructure that’s robust enough to enable the subsystems that create the ecosystem, this hyper-connected reality starts to crumble.

Herein lies the challenge. It began, in many ways, with the consumerisation of ICT kick-started by work-grouped Windows 95 computers, and was boosted by the likes of Apple and Blackberry. This has since seen a proliferation of a myriad of devices and applications which are now swamping the marketplace such as Microsoft’s own Surface Pro. As a result we now see the enduring boundaries of corporate IT serially tested by the modern workplace; leading to the incremental creep of ‘Shadow IT’.

Of course, workplace technology has evolved at a startling rate over the last few decades, yet this was only a taste of the period we’re now entering, where a whole new pace of change is unleashing new pressures and opportunities onto CIOs and organisations.

It’s no secret that end users increasingly call for IT which enables them to be more productive and better connected, whether at the office, at home or on the move. Once you add the emerging and highly important role of analytics and big data to the enterprise operations equation, it’s clear that handing out mobile devices to employees no longer comes close to satisfying the demand for a truly mobile workforce.

Thus, ICT departments are expected to enable consumer like services and mobilise their workplaces and, in turn, solution providers must define a customised, transformational journey that makes sense for both organisations and their users. This can only be achieved successfully if the initial stage includes a consultative approach; establishing a roadmap linked directly with the organisation’s strategic aims for a mobile workplace. This is why the most progressive ICT departments are already starting to redefine their roles within organisations.

The future workplace has become human-centric. In other words, it’s empowering, connected, and collaborative placing the end user at the heart of everything that is done. The organisations unlocking this potential by becoming hyper-connected businesses – where everyone and everything is connected – are set for an exciting future.

Tags - digital transformation • future of work • information accessibility • user experience • Windows 10 • workplace transformation
Share this article
Next article Big Data, analytics and the IoT – The force is strong!
Previous articleCIOs: let technology do the heavy lifting, while you focus on flexibility and the future